Hello, Christy Sims supporters! This is Laci, Christy’s friend and the Social Media Director for the Christy Sims Foundation. Usually, Christy writes these blog posts herself but I’m filling in today because this week, I have a question for all of you. Before I ask it, though, let’s back up a little.

As you all know, Christy has been very busy over the past year and a half: A two month coma directly following her April 2013 attack, a dozen major reconstructive surgeries and serious physical therapy to follow that, fighting for a case to be brought against her ex, assembling her foundation, and squeezing in media interviews every chance she gets in order to help raise awareness about domestic violence. Oh, and of course, raising two teenagers which I hear is a feat all on its own! In short, she does not slow down. I think we all appreciate that about her.

As Christy continues to fight, recover, and speak publicly about domestic violence, I think it is important that the people who know her share who she is to us. To strangers hearing her story for the first time, she might just be “the lady whose ex-boyfriend threw sulfuric acid on her” which is true… that happened. However, as we all know, she’s so much more than that. And, it’s really important that people understand that about domestic violence survivors – “They” are just like you and me because domestic violence can and does happen to people just like you and me.

Let’s tell the world Christy’s story but let’s make sure it’s the whole story because she is so much more than just the cowardly attack against her. I’ll even go first. 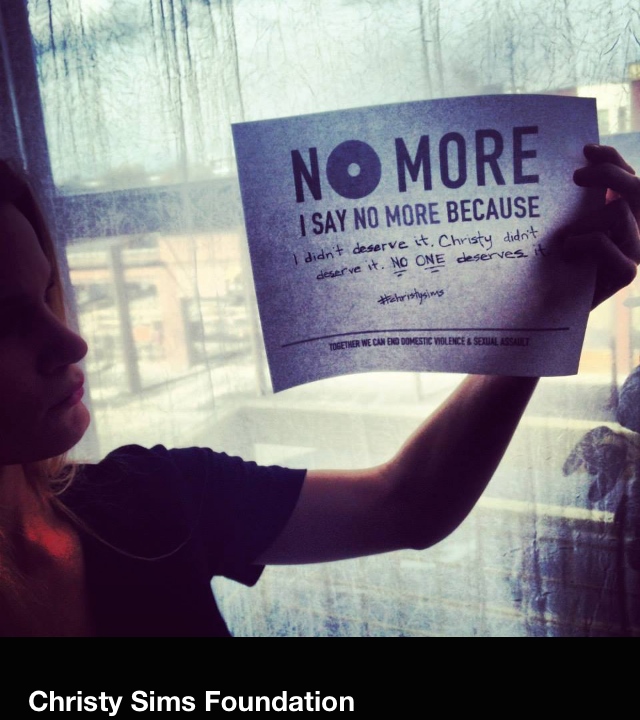 “Who Is Christy to Me?” by Laci Texter

Witnessing how strong she has been since her attack has given me the strength to confront some of the demons that have haunted me since leaving my abusive ex-boyfriend seven years ago. That’s right, I’ve had years to process everything that happened to me and it’s still difficult to do. I see Christy, who woke up from a two-month coma, taking everything on immediately.

It’s not that she does this flawlessly because she doesn’t. If she did, I’d know for sure she was faking her way through “recovery”. What’s most powerful to me is her transparency in her recovery. She shares what she is dealing with on a daily basis and – surprise! – it’s not always “I’m feeling strong and courageous!”. Sometimes, it’s “I’m having a bad day, period.” It’s refreshing because being a domestic violence survivor is exhausting if you’re constantly putting on a brave face.

Ok, so now it’s your turn. Sometime in the next day or so, please share with us who Christy is to you. Share a silly story about your friendship or a memory of being in school with her. Share a time she helped you out or made a difference that she may not even be aware of of. In short, help share Christy’s whole story with the world.

Please send your written or video contributions to info@christysims.org or share directly on the Christy Sims Foundation Facebook page and we will add it HERE. Also, please feel free to include a picture with your entry!